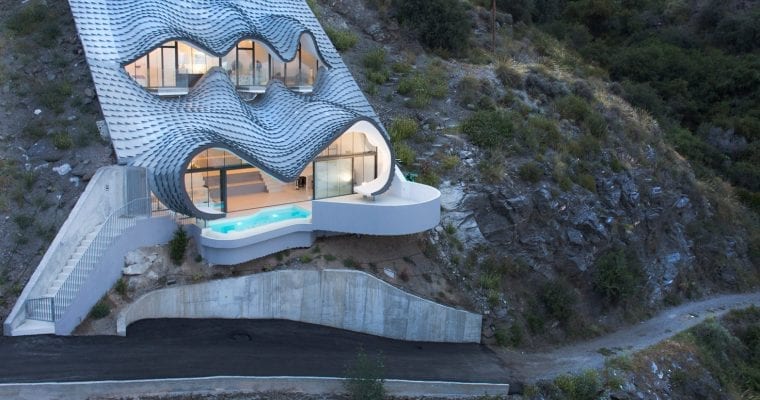 One client chooses a complicated plot at an inclination of 42 degrees ashore the mighty Mediterranean Sea, in Salobreña, Spain. And the phenomenal craftsmanship of GilBartolome Architects culminates it into an equally magnificent House on the Cliff.

The House has been neatly integrated with the surrounding landscape. Structurally, the metallic roof seems inspired by the Mediterranean waves but sits like a majestic dragon’s skin on the ground. Also, a coincidence that the dragon starring ‘Game of Thrones’ was filmed in the vicinity.

The dwelling spans two levels. A living area on an extensive terrace that’s integrated along the slope to another cantilevered terrace housing a swimming pool. Moreover, the second level houses the private bedrooms, with luxurious views of the sea.

The entire House is almost buried in the ground to make the most of ground temperature, which is 19’5ºC approx. Besides, all the internal spaces are bound by a curved double shell of reinforced concrete. Held to the ground, and for coordinating the airflow.

The fun part is that the main space can also double as an auditorium for more than 50 people. Besides, only a movable glass facade parts the ancillary terrace from the living area.

However,  the house was commissioned with an extremely tight budget and in the period of national financial crisis and unemployment. Thus the architect’s used hand made materials, which were subsequently also installed manually.

The architects have rightly dubbed the House on the Cliff as a Gaudiesque contemporary cave!

Name: House On The Cliff

Welcome to The House Tours. A place to get inspired by viewing unique houses all around the globe. There are categories if you want to search for something specific or feel free to use the site as you want. Have fun!